Volcanic rocks represent only 5% of the terrestrial land but through weathering they contribute significantly to the global flux of solutes to the ocean and hence, consumption of atmospheric CO2. 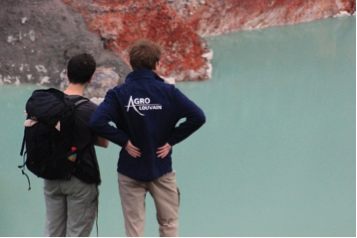 Recent studies highlight the disproportionate contribution to weathering fluxes of volcanic island arc and continental hotspot regions. Potentially important uncertainties remain regarding the variables which control weathering fluxes in these regions, which are often hydrothermally-active.  In turn, these uncertainties prevent accurate estimates of atmospheric CO2 consumption and production of solutes to the ocean. The objective of the research is to develop a detailed understanding of the factors influencing weathering fluxes from hydrothermally-active island arc and continental hotspot regions.  The meteoric and hydrothermal sources and processes contributing to weathering fluxes are unraveled by an analytical approach combining the stable silicon isotopes and the germanium to silicon ratio.  Three hydrothermal systems from volcanic island arcs are used as case studies: La Soufrière volcano in Guadeloupe, Aso volcano in Japan, and Kawah Ijen volcano in Indonesia.